I had the Geometry Regents today, and I am really glad that that is now over with. It was pretty easy, I thought. As always, there were a few questions that I was confused on, but I think I did well, which is excellent. I was actually one of the first people done, but the proctors got to me like second to last, so I was stuck sitting there for ages. Those chairs are really uncomfortable, in case you haven't noticed. Well, of course you wouldn't have, my two readers haven't been in school for years. : ]
Afterwards, I sat outside on the bench with Ashley for another half an hour, waiting for the bus. In the end, I got to ride in the school suburban with a grouchy lady bus driver and three boys. It was pretty boring, but it was nice to be home. My next exam is Thursday, though I am contemplating going to a Biology review tomorrow. I think that I probably will.
UPDATE: My score on the Geometry Regents was a 98, and the Biology Regents was a 96. Score!
Posted by Madeleine at 12:31 PM 3 comments:

The Last, Psychedelic Day of School

It is the last day of school, finally and at long last! Of course, I still have Regents, which I will have to study for, slightly marring this joyous occasion, butI'm just going to pretend they don't exist until about, oh, five o'clock ish, so I can blog and screw around on Facebook in peace.
Today was extremely bizarre. It started in French class, when our teacher showed us this psychedelic animation. It was made in France, but there was no speaking, and all of the characters were extremely distorted and weird. I had a really hard time deciphering the plot, but I think it was about this guy who grew up to be a professional biker. He was like super tall and super skinny, and had a huge nose, and weird, boxy leg muscles. It was extremely creepy. There was also an obese dog with stick legs, and a short grandma who abused the dog by apparently making him power a boat across the Atlantic to rescue the biker (her grandson) who had been kidnapped by these men whose faces were in the center of their bodies and were the size of refrigerators. It really seemed drug induced.
The seniors had fun with pranks this year. They threw thousands of bouncy balls into the hall, which was pretty awesome. Everyone had them today and was screwing around with them (except for me sadly, because I didn't have any).
And then there was sixth period lunch. A guy senior, wearing a cowboy hat, a George Bush mask, and a black Speedo ran through the cafeteria waving an American flag. I sat there blinking for a few minutes, trying to remove the image from my mind.
We got free ice cream, left over from the JH kids. Cake batter ice cream is really weird. Pretty good, though.
There was a water balloon fight after school. I did not get hit, which was nice. It was mostly in the parking lot, which was disappointing. Not that I wanted to get hit, since some people put gross stuff like milk in the balloon, but because I really wanted to watch it.
Grrr!!! I hate the little kids on our bus! They are incredibly annoying and bratty. It's extremely depressing to think that a lot of them are going into 7th grade next year. I really don't want them in the high school. With any luck, I won't see them at all and be tempted to (try to) shove one of them into a locker.
Just kidding. I can't be that mean.
I have my Geometry regents tomorrow. I am quite apprehensive, but I'm glad to be getting them over with. I will study as soon as I finish this entry. Sigh...the euphoria of the last day of school is so short lived.
Actually, I was just bored most of the day, but I'm just pretending I was euphoric. It's more fun.
Posted by Madeleine at 4:18 PM 2 comments: 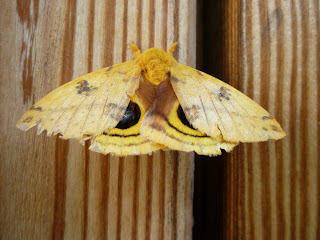 On the door to our porch this morning we found an Io moth. They're somewhat common around here - or so I am led to believe, due to the fact that my grandmother, who lives next door, also found one recently. Fortunately, ours, unlike hers, is alive.
Interesting side note: Io was a beautiful princess in Greek myth. Zeus loved her so he turned her into a cow to hide her from Hera.
Jeez, what a show of true affection! Who wouldn't love to be a cow?
I'm not quite certain how the name of Io the cow was put onto a moth, but neither am I sure how the Polyphemus moth got it's name as well - Polyphemus was a cyclops. The Polyphemus moth has two eyes. And also, why does it seem like all large moths are named after Grecian characters?
(Did you know that the Atlas moth has the largest wing area of any moth? And possibly insect? The monstrosity is larger than your two hands put together! Also, it was so named because the patterns on it's wings look like maps, or so they say. But the term Atlas still comes from the Titan, so I know I'm right in my theory.)
(Disregarding Luna moths...but their name is in fact Latin. So there.)
Posted by Madeleine at 10:24 AM No comments:

Frankly, I think summer starts when the weather gets warm and the fireflies come out. Fireflies are like a symbol of summer. There were some in the field, all glowy and bioluminescent. I caught one, but he was boring.
I went to an open house this evening. It was Lydia's mom's new house, and was quite nice, judging by what I saw of it. I was outside almost the full time, with Lydia and her (awesome) friends. It was an amazing amount of fun, I must say. We tried to take candid pictures of each other, played on the playground, drank soda, climbed walls, and talked a lot. It was fun. I had met most of the people last year at Lydia's birthday party, minus one. 'Twas nice.
There were fireflies in the field when I got back. They were pretty.
Aghh...I think I need to go to bed. Thank goodness it's the weekend. It feels like summer. Sigh...one more day...not including Regents. Well...I'll probably survive. Probably. If not, I want roses at my funeral. Either dark red ones or orange and white ones.
G'night, kids. Je suis tres fatigue. Maybe I'll watch NCIS in bed or something. (good show, watch it.) Cya.
Posted by Madeleine at 9:56 PM 2 comments: