The Dadaist Spambot is getting on my nerves at the same time that the un-aesthetic-ness of Blogger is irritating me. Therefore, I am moving my blogging habits over to Wordpress, which is prettier and more populated. Also, maybe then Anna can finally comment. :D

I do hope you all will follow me still! I won't be writing here anymore, so go find me over there.

Speculations and Stargazing at Wordpress
Posted by Madeleine at 8:25 PM No comments:

I have a spambot

Just recently my blog has become plagued by a spambot. It's interesting, though, as the automated system doesn't appear to be advertising anything or talking about diet treatments, but is instead spewing something that could be mistook for dadaist/surrealist poetry:

This is kind of fascinating. Almost beautiful, really. What does it mean? There must be a hidden symbolism.

In other news, I am considering moving to Wordpress. Nicer platform, fewer glitches...
Posted by Madeleine at 9:47 AM 2 comments:

Gorgeous yarn, right? It is extremely thin cotton thread that has little periodical ravels that look like dew drops on cobwebs. Good purchasing decisions on my part. 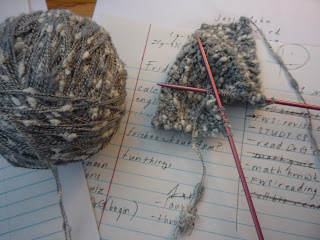 I am still trying to figure out precisely what to do with it. I started knitting a very thin scarf, but it occurs to me that the finished project will neither be functional nor particularly aesthetic. Here are the options I am considering, and their caveats:

a). Knit a much wider scarf, perhaps closer to eight inches across as opposed to the current three. It would be much prettier and also fairly functional. The only thing I worry about is whether I would have enough yarn to make a full-length scarf of that width.
b). Crochet a lacy jumper. I've had a notion of crocheting a dress for a while, and it could turn out quite prettily. Again, though, I sincerely doubt I have enough yarn.
c). Crochet a spider-webbing-lace hat, in the style of the knit berets that are so popular currently. Though not particularly warm, it could be quite pretty. The only trouble is that I do not think I have a small enough crochet hook for the level of intricacy that I want.

I am not certain as to where I should go from here. There are halting problems with all of the options. Hmm.

Posted by Madeleine at 1:07 PM No comments:

Benjamin - What is this, Take III?

Here is the piano part in which you can actually hear my voice! And also I have facial expressions and I like them.


I know I've posted this song twice before, but dammit, it makes me happy. Also, the piano version for the last one makes it nearly impossible to hear anything I'm saying. Turns out it helps if the microphone is in front of you; who would have thought.
But seriously, my facial expressions. I keep cracking up.
Posted by Madeleine at 1:42 PM No comments:

Bible Study: Did You Even Read This Thing? Part III

Page 168 - "Try This: Refuge"
Basically, this blurb is talking about how God/the Israelites set up cities of refuge where people who had accidentally killed someone could run to and not be killed by the dead person's avenging family members. This is, admittedly, a nice idea, especially by Biblical standards. Not killing innocent people? I approve! In this article, they talk about how nice and brilliant this idea was, and include some silly little anecdotes about permed hair. Aw, it's so fun and happy and -

Guys. Article placement. On the opposite page is Numbers 31. In this story, God commands the Israelites to kill all of the Midianites. All of them. Every last one.
So the Israelites kill all the men, but leave the women and children.
And you know what God says?
"Why didn't you kill all of them? I told you to kill all of them. Kill all the women and the boy children. You can keep the virgin girls, though."
And then you know what happens to the virgin girls?
Well, it doesn't say. There's a discussion of how they're divided up with the rest of the plunder of gold and silver and livestock, and then they are never mentioned again.
Never. Mentioned. Again. Because who cares about the virgin girls? They're just women. They're just plunder.

Ah, yes, Yahweh. Good job with your cities of refuge. So you saved a few innocent lives. But meanwhile, you just slaughtered an entire tribe, including Balaam, a man who blessed your people a few chapters earlier, instead of cursing them as he was being paid to do. You just committed genocide.
Yes, you absolutely won the morality award with that one. What a loving god.
Posted by Madeleine at 11:49 AM 4 comments: