This Sunday we drove a nice 2 1/2 hours to my aunt and uncle's lake house in Pennsylvania. On the way down, we stopped in Binghamton and had a nice, 10 minute chat with another uncle who lives there. I haven't really talked to him that much before, and he's actually a really funny guy.
The lake house was really good-sized: there were three bedrooms, three bathrooms, a kitchen, a TV and a living room, and a nice porch. It was very comfortable, and there was a lot of food. Which was nice. :)
When we went inside, I met Devon, my second cousin (I think) who is eleven, lives in Carlsbad, California, and is going into 6th grade. She was fun, and Emme and her hit it off, since they're close in age. We went swimming in the lake. It was really shallow, and there was a ton of rocks, so you really had to pick your way around. Still, there were some deeper sections, which was nice. Jerry (mon oncle) has a paddleboat and a rowboat, so we went for a couple of rides. Later, in the afternoon, they went over to the artificial beach to make sandcastles.
Then I ate about fifteen snickerdoodles, which were delicious (hence the consumption of 15 of them).
Ha! The family reunion wasn't completely excruciating! I think that's a first!
Posted by Madeleine at 5:07 PM 4 comments:

DO NOT READ THESE PICTURES IN ORDER! It will make MUCH more sense if you start at the bottom and read the long section, and then work your way up. Sorry for any inconvenience. (not that it's my fault!)
5. This picture was also taken at Mizpah Springs Hut. This is us in our several-hour-long pitch tournament. There wasn't a lot to do at the hut once we got there, you see. I think that I can probably go many years without playing another game of pitch, or any card game for that matter.
(left to right- Aunt Peggy's hand, Uncle Jeff, Luke, Sid, and me, looking utterly fascinated) 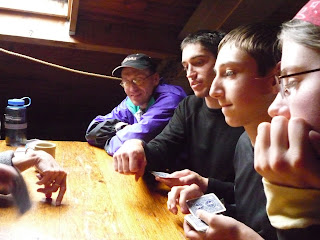 4. This is me looking out of the loft at Mizpah Springs Hut. This was the hut we went to after Lakes. It was a four or so mile hike there, and it was worse because the fog was very dense and the rocks were slippery, not to mention the forty-mile-per-hour continuous wind. 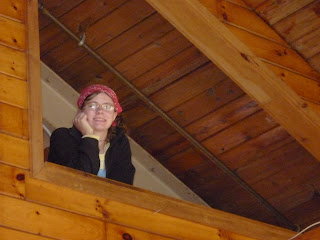 3. This is Emme (meh sis) on our hike up Tuckerman's Ravine to the Lakes hut. She's in front of a rare patch of bright blue sky. This was one of the hardest hikes we did. It wasn't that far, but the elevation we achieved was staggering. Imagine a really steep ladder that goes on for thousands of feet. With very few hand holds. 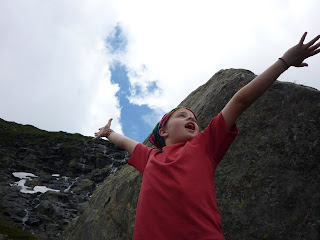 2. This is us (being Dave, Sid, Sadie and me) on our way to Glen Boulder, which you can see in the top left. It looks smaller than it is in actuality, of course --way smaller. 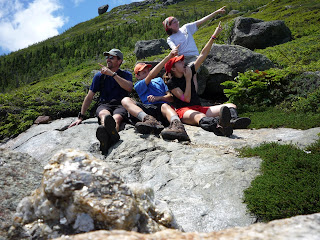 1. Day/Pic 1: This is our room. All of the rooms at Pinkham Notch are named after organisms found in the mountain. We generally stay in either the Spotted Salamander or the Peregrine Falcon room, but we decided to be different this year. 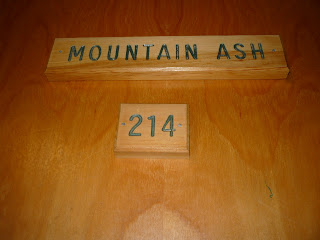 I just got back from my trip to Mt. Washington, NH, yesterday. We hiked a total of 31 miles in four days, which I think is pretty dang impressive, especially considering that much of it was steep and rough, not to mention wet and slippery. Days 4 and 5 were especially treacherous. On the hike from Lakes of the Clouds Hut to Mizpah Hut, it was foggy and very windy, and from Mizpah to our car at Crawford Notch, it was cold and drizzling, and foggy to cap it off. That hike was the hardest. We were tired out, and the hike was 5.7 miles. The worst part of it was at the end, when we came to a sign that said that we had two more miles to go. Fortunately, the sign was wrong. Or we were wrong. It's possible that the sign said that we had 0.2 miles to go, instead.
Fortunately, I am home now, and finally dry. :) And I have a deep appreciation for any and all
modern amenities.
Posted by Madeleine at 9:37 PM 2 comments: